The city is ready to host Progetto per L’Italia, a project about the 500-years-disappearance of the Italian genius, starting from the reinassance to the present day to show the Italian cultural symbols.

This recurrence falls on May 2, 2019 and the city of Milan has been chosen as capital of the celebrations. This is not surprising because Leonardo moved from Florence to  Milan in 1480, where he lived for 19 years. Leonardo’s stay was the most
productive period of his career and thanks to the patronage of Ludovico Sforza, whose aspiration was to create a perfect city inhabitated by exceptional men of talent, allowed Leonardo to be really appreciated as the ideal court artist.
Ludovico gave to Leonardo the time and the resources to pursue detailed researches into nature and art. In those years Leonardo emerged as a painter-philosopher, convincing everybody that his art was not just mirror the nature but reveal a higher reality of harmony and beauty and enhance the new renaissance philosophy Milan city council scheduled an huge calendar of exhibitions and shows lasting all around the year to honor Leonardo and to illustrate his works.
So it won’t be surprising to know that the heart of the celebrations in Milano willl be the Sforzesco Castle, where Leonardo lived at the Court of the Duke Ludovico Sforza

Ludovico and his women

Leonardo and the Sforzesco Castle

The city council of Milano scheduled an huge calendar of exhibitions and shows lasting in all around Italy to honor Leonardo and to illustrate his works, also through contributions from the cooperation of the major cultural venues associated with him.

So it won’t be surprising to know that the heart of the celebrations in Milano willl be the Sforzesco Castle, where Leonardo painted the frescoed ceiling of the Room of Wooden Boards (Sala delle Asse), cobining a naturalist depiction with a strong symbolism. This is an  exhibition of assorted designs by the maestro and his followers that highlights the artistic relationship with Tuscany.

This recurrence was the perfect opportunity to reopen the Room and revealing to public the ancient Leonardo’s Monocromo after a long restauration.
The room has also been open for the 2015 Expo but this time will be reachable from the Elephant’s Courtyard after long restauration works. The scaffoldings removal is already done, replaced by gangways to admire the Carthusian job of Leonardo and the Monochromo too.
The Monochrome section of decoration -located in the northern corner of the room and considered to date to the spanish period, was covered over during the works of the late 19th century and attribuited to Leonardo da Vinci at the time of the post-war reconstructions.
Sforezesco Castle will host some more exhibitions, the multimedia experience “Milan of Leonardo”  for example, in the Sala delle Armi, recreating the city of his times. 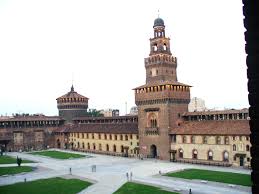 Another highlight of course, is the most-copied painting in the world – The Last Supper – in the humble monasteryl of Santa Maria delle Grazie.
All the lucky people who will admire the Last Christ Supper, from Oct. 16th 2018 to Jan. 13, 2019 will also see the underdrawing studies about the most appreciated Leonardo’s painting, to understand the creative process and the final result.

The Last Supper was the painting that truly cemented his reputation during his own time. The image immediately became famous all over Europe an it was the most copied painting of the century — not only in paint, but also in marble, wax and terracotta, Everyone wanted a version of it. 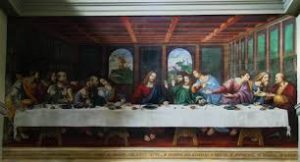 Leonardo finally created the ‘work of fame’ he was dreaming about. As it turns out, Leonardo  started the mural at a most inopportune time. Just a year before he began the project, King Louis XII of France invaded Italy.
In 1494, da Vinci was 42 years old. At that point, the Renaissance man had been judged by some contemporaries to have wasted his potential but fter years of starts  and stops, da Vinci finally achieved the glory  with The Last Supper.
Today The Last Supper is still one of the most visited attraction of Milan.

The documentary exhibition “Leonardo 1939. The constructing of a myth” was curated and designed by the Museum who brings Leonardo Da Vinci’s name. It retraces, through documents, volumes, photographs, drawings and historical objects from the collections, archive and library of the Museum, the genesis and context of the 1939 exhibition “Leonardo Da Vinci and Italian Inventions” that was at the root of the foundation of the Museum itself in 1953.
The 1952-53 Leonardo celebrations organized in Italy and abroad were based on the idea of Leonardo as a genius and forerunner of times. In this context the Museum opened with an exhibition dedicated to Leonardo with a history that interlaced more than once with the creation of myth of Leonardo.
The temporary exhibition Leonardo Da Vinci Parade – curated and developed by the Museum – comprises a large selection of fascinating models built in the 1950s through the interpretation of Leonardesque drawings and frescoes by sixteenth century Lombard artists, granted for storage in 1952 by the Pinacoteca di Brera.
The exhibition is an unusual combination of art and science in an unprecedented show which touches Da Vinci’s numerous fields  of interest and study through the worldwide renown historic collection of the Museum.

The library and picture gallery, founded at the end of the 16th century, houses Leonardo’s Codex Atlanticus notebooks
and a superb art collection, including his only known portrait painting of a man: The Musician.
The Codex Atlanticus

This collection of some 1,200-odd pages forms the most extensive single selection of Leonardo’s notebooks, the source of our insights into his extraordinarily original and all-encompassing mind. It covers nearly all his working life – from 1478, when he was 26, until his death in 1519. 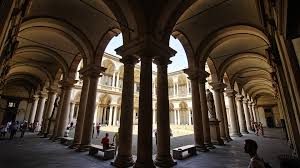 Until 2015, a programme of exhibitions that changes every three months will display all the pages of the Codex, following different themes. You will find the current selection in two locations: the Ambrosiana Library  and the Bramante Sacristry at Santa Maria delle Grazie.  They reveal Leonardo’s reflections on the Sun, the Moon and the Earth. The range is extraordinary: a sketch of the Mediterranean; a list of the rivers of India; diagrams  of the Sun’s rays; a note on how to view an eclipse; and some reflections on the nature of crayfish and crabs.
In both venues, they are beautifully presented and informatively captioned, and certainly worth visiting.
There is just one problem: they are mounted about four feet from the floor, so to view them you must bend to the point of maximum discomfort and hold your position until the pain becomes too great to bear.

The Palazzo Reale in Milan, a former royal palace with its large halls, refined furnishings and sweeping staircase, will also
host two important exhibitions: the first is “La Cena di Leonardo per Francesco I: un capolavoro in seta
e argento” about the time – in 1516 – that he met Francis I, the new king of France, and in which it will be possible to admire

the precious tapestry that reproduces the fresco of Santa Maria delle Grazie, one of the very first copies of The Last Supper. 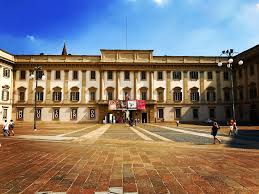 The second exposure will be realized in collaboration with the Museum of Natural History, moving part of the collection to Royal Building.
News coming soon Enjoy Milano